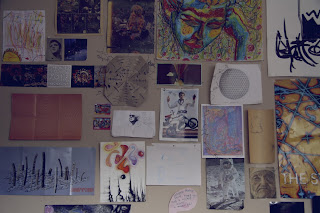 EXPLICIT MATERIAL BELOW- READ WITH CAUTION

Last night I saw a girl get her throat cut and her heart pulled out of her chest. The music just kept pumping and the band played on happily. I took a walk and saw the House of Braids. There were a few people at the show and one of them danced in the lobby. The girl with the cut throat starred in a movie. We ate at Olympia and the kind waitress was very concerned for our well-being. The night was humid and you could see lightning on the horizon a long ways away, too far to hear. We slept over with Feral Children, who gave us five CDs, one that caught the glare of the sun this morning as we started driving through to Winnipeg.

Apparently I am to not censor Knots in his writing.... I really don't like the part about the cut throat girl though, so rather then making him take it out, i'll just point out that it makes my parts feel funny. Which parts he asks? The parts that matter.

Last night we arrived in Saskatoon at this-must-be-gothic-venue-because-of-the-all-black-walls-and-cement-rooms-and-unfinished-cellar-stairs-leading-to-the-basement, whatever. But to top it off they had playing this TERRIBLE MOVIE which i believe had paris hilton with googly eyes and black hair, anyways, as I'm watching a very stunning solo act, these hands, whom is singing 'so you wrote it in a book' i look to my right a little, apparently i just had to look to the right, and there is this movie depicting a woman having her throat you know, and then her heart, you know, and then i walked with neal to go and eat some meat, so you know, it was just..... ironic, and irony contributes to one feeling especially strange, especially when under slept. Apparently there were some deer just now. So far no hits.

We went back to our friends apartment and had the floors to ourselves. He offered me some pot, said he'd found a bag of it so if anyone could have some if they wanted. I asked him, 'well is it clean?' and he said 'well it made me feel pretty crazy, but i think I was just paranoid.' I didn't have some but it was a nice offer. I love people.

I was a stoner for a good four months in high school, time seemed to fly by fast, time already flies by fast so I stopped doing it. People must laugh at a good four months. Whatever. We'd go up onto this hill that was out behind the school, filled with trees. It was the hill of an elementary school, I always felt bad about that. They were a new group of friends I was trying to fit in with. They'd sit in a circle all cross legged, very bohemian like, a word I later used to describe them from stores like H+M and Urban Outfit, pertaining to the Alternative Artist in ALL OF US. I thought it was great. I had to cary visine around, I got to have some sort of fruit with creme perfume sprayed over me before class. I was even getting 80's in math for the first time. I guess that one begins reminiscing when sitting in a van for 9 hours.

Well back to what is happening, we woke this morning at 7:30 am to meet our 8:30 departure so that we can arrive for our 7:00pm soundcheck and our 11:30 performance. It all numbers from here. Maybe I should start smoking pot again.

ps. Feral Children is awesome and one should go see him if they ever get the chance.